How Long Hold Time is Costing Your Business

Time is money. However, many organizations fail to realize this when it comes to the time of their clients. There is no surer way of sending your customers packing away than constantly putting them on hold. Clients might ignore a little faulty service from time to time but they never ever forget that one time they were put on hold by a calling agent and made to listen that super annoying electronic music interrupted every 20 seconds by the even more annoying mechanical voice claiming how the customer’s satisfaction is the most important thing for the company. 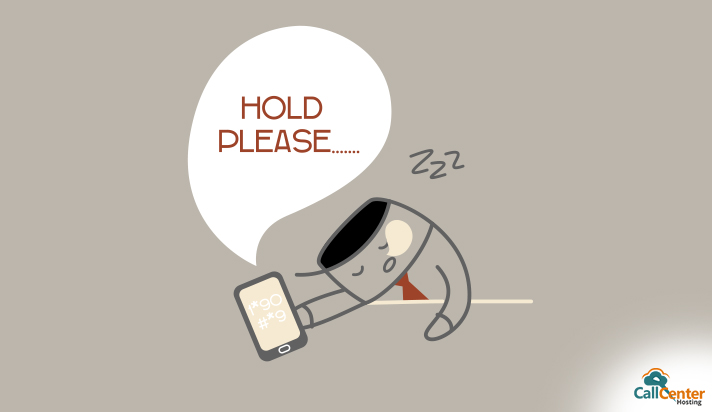 While many customers have issues that force them to wait because they urgently need to talk to an agent, most customers cut the call on a single bad experience and prefer to take their business elsewhere, as this study by YouGov illustrates. On an average, customers hang up after reaching a boiling point of thirteen minutes. Mind it that’s an average value as many customers are willing to wait for hours. In reality, around 5 minutes is all the customer is willing to wait for. So it is very important that the holding time is reduced to a minimum. Another noteworthy thing is that most customers don’t call about their problems, they just change their vendor. So not giving enough attention to the satisfaction to the few who actually did called is complete blasphemy.

How is it going to affect your company?

Losing customers because you couldn’t help putting them on hold is a huge cost disadvantage on two fronts. Firstly, you lose the customer who had been calling. The services he was paying for presently as well as any extra ones he might have paid for in the future are gone. Now to replace this customer you have to find yourself a new one.

Well, it’s not. It costs a business six to seven times more money to get new customers than to keep existing ones. In other words, Selling to existing customers is almost sixty to seventy percent easier. That is just the first front, there’s another problem you are going to face: Negative Advertisement.

These customers who decided to ditch you guys will not have anything nice to say about your company, especially not about your customer service. Customers are the best form of advertisement as any marketing expert is bound to say. Well, these customers who got so irritated by your hold times will be telling others of this annoying habit of your company and these people who were once potential customers are now gone. All they will be good for is telling even more people how much your company sucks.

What to do to keep the customers from running away?

What you do is really simple. You make the hold times shorter and if that’s not possible, make it bearable. It is often inevitable to put customers on hold, an agent might need to go through some data to answer their questions or coordinate with the tech staff to get their problems solved: but does the agent press the hold button and force the customer to listen to that awful music for 20 minutes? No, a good agent would first ask permission if he can put the customer on hold before he does so.

Moreover, it is advisable that agents inform the customer of the true amount of time they are going to be on hold. Asking them if they would prefer a call back if they are not comfortable with that amount of time should be the next step. Then once their issue is solved or the relevant information is on hands, the agent should give them a call back on the time they decided on with the customer. This keeps them happy and instills a feeling of trustworthiness amongst the customers.

Customers have a habit of getting annoyed really fast. Being put on hold and made to listen to repeating electronic music tends to annoy them even faster. So be honest with them about the time its going to take to get their job done or tell them to contact a while later.

Putting customers on hold is going to happen from time to time but it is important that you work towards keeping those customers happy. This will save both vast amounts of time as well as money in the future.

Arsh Sharma loves fooling around with technology and the latest gadgets. He feeds off pop culture and loves anything that has got something to do with comic books, dota2 and football.

CX Webinars You Can Attend In 2020
Infographic: Never Say These Things to Your Custom...
The Importance of Personalization in Customer Serv...
3 replies